3 Experiential Marketing Campaigns you need to know about

Experiential Marketing has been dubbed by many as one of the most successful way of establishing brands and creating excitement around new product launches. Increasingly, we have seen the term being thrown around alongside buzz words such as ‘brand activation’ and ‘live brand experience’. But ultimately the idea at the core of these terms, and this form of marketing, is to engage the consumer in fun and memorable ways. So in practice what does it mean to have an engaging campaign, and how are these campaigns getting it right?

ZipWater Campaign
ZipWater, a company that offers various filtered taps, have been transporting their #HydrationStation to various locations across England. Consumers have been able to sample their various taps directly from an interactive truck – experiencing the product first hand.
Mobile truck campaigns like this are becoming an increasingly popular form of brand activation. Touring in mobile interactive trucks gives the brand the wow factor as consumers are drawn in to sample the product in an exciting way. “Popping up” with a van in various cities means that these campaigns create a similar buzz to pop up shops – they are exciting because they are transient and therefore exclusive.
The campaign will run until June so if you’re hoping to catch the ZipWater roadshow, keep up with the hashtag #ZipEffect

LG’s TWIN Wash Outdoor Advertising
To accompany the advert for the LG’s TWIN washing machine which allows delicates and regulars to be washed simultaneously but separately, they took to the streets in late February with a performance. In scenes similar to those featured in the advert, spectators witnessed giant clothes battling it out – a metaphor for the age-old struggle of sorting out your washing.
Bold guerrilla activities like these are a great accompaniment to a product launch and a sure way to get people talking. The more noteworthy the display the more likely it is that its reach will be greater as people will share the moment on social media or tell friends, family and co-workers. Taking a risk and creating a bold display often pays off! 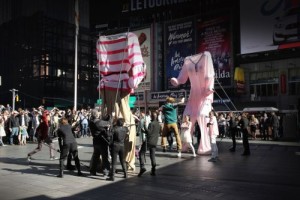 Zoolander
Zoolander’s huge marketing campaign for the release of Zoolander 2 (2oolander) culminated with the pop up centre “The Derek Zoolander Centre for People Who Don’t Age Good” (DZCFPWDAG for short). The centre’s opening in New York in collaboration with Kiehl’s for the film’s premiere in February was just the latest stunt in a long line of brilliant marketing ploys. From Zoolander’s and Hansel’s walk at Valentino’s AW15 collection (11 months before the film was released) to Stiller’s appearance on the cover of Vogue as Zoolander.
This variety of stunts alongside more traditional ways of promoting the film has shown that Experiential Marketing is a great way to deliver any brand’s values. By opening the centre consumers were invited directly to be part of Zoolander’s playful and fun involvement in the fashion and beauty industry. These live events were captured through social media which played a huge role in creating a buzz and continued free publicity – essential marketing in 2016. 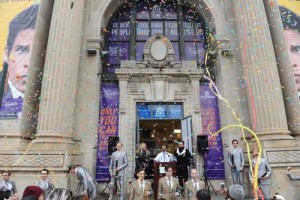 Have you seen any Experiential Marketing campaigns this year that you think we should know about? Let us know down below.
Or if you are interested in activating a Brand Experience then get in touch with Kate to discuss potential opportunities – kate@highjam.co.uk / 020 7407 8913.

We have had teams up and down the country over the

The best thing about promo is sometimes getting to

Smiles all round for team Highjam as we settle int